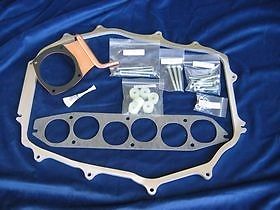 All Motordyne Iso Thermal systems keep your upper & lower plenum cooled without the risk of throttle body freezing when driving in cold weather.

Instantly add 10-15 horsepower & a deeper engine note to your G with a Motordyne plenum spacer. The Motordyne Plenum spacers are stealth. The 5/16" spacer is designed to work with your car's stock engine cover & strut bar. For turbo charged & super charged vehicles, the gains can easily exceed 17-23 HP.

2) The fourth thermal management component is the Copper Throttle Body heater. Copper Iso Thermal is a premium set & forget component that can be used in place of the Coolant Control Valve (CCV). It doesn't matter how hot or cold the weather is, you don't have to adjust a valve based on the season or ambient temperatures. Install it & the throttle body remains heated while the plenum continues to remain thermally isolated. Keeping the throttle body heated prevents ice formation on the throttle body butterfly valve when driving in cold weather.  If it snows or gets really cold in your area, use the Copper Iso Thermal so your engine can take full advantage of the cold air you are driving in.